Hi there,
Glad to hear you managed to fix it!
I may have one spare if ever. I removed the old BMS from my Cityel and installed a Daly BMS instead. Unfortunately my CityEl does not appear to agree with the change and I can no longer start it… should I remove the old BMS altogether? I have of course removed all the connections to the batteries.
thanks for your help,
Cheers,
Greg
K

gregster schrieb:
I can no longer start it… should I remove the old BMS altogether? I have of course removed all the connections to the batteries.
Zum Vergrößern anklicken....

If by "old BMS" you mean the Boostech-Boards, you will at least have to remove or bridge the relais which breaks the circuit if the (old) BMS detects a critical battery-failure.
As far as I know this relais should be mounted under the seat or under the dashboard.
I have a similar problem right now: one of the slave-boards (the ones on the Batteries) is defective, so the BMS thinks one battery-cell is broken (although it really is completely fine) and cuts electricity to the curtis. So no more driving for me until the new board arrives.
Maybe the Daly-BMS also has a relais-connector - maybe then you can just rewire that, especially if the drivetrain is wired "around" the BMS as for the very high currents.
Hope that helps a little.
G

Thanks a lot @Kamikaze !

This does help a lot indeed. I had tried so many things but thought it may have to do with the “old” BMS. So I will focus on this then.

As I am a bit of a noob what would be the easiest in your opinion? Removing or bridging it? If I bridge it, would it be OK if I bridge at the end of the cables - the yellow and blue ones?

ps - this is an old picture, and confirm that I have changed the batteries and removed the individual modules above the batteries since but still have those cables hanging lose.

I have never seen these modules! Is it with a microcontroller or with an opamp? The 4-pin device looks like an optocoupler. The one with the heatsink on it maybe a transistor or mosfet for balancing. Adjustable voltages! Looks interesting! I think its analogue, means with an opamp. The wiring could be a parallel connection of all optocouplers outputs, allowing the on-cell units to switch off the motor controller's control voltage.
If you have a number oft the 8-pin IC, I could probably check or repair the units.
G

Thanks for your input @Iaase !

I believe these were indeed custom made by the former owner - who was experienced in electronics.

Should these modules be of interest to you, I would happily given them to you and be happy to mail them to your place - as I will no longer need them.

Yes, I am! I sent you a message.
Curious to see, what other "developers" are creating ;-)
S

I am thinking of thermal and mechanical stress for the soldering joints. Undiscovered cold joints? Durability and rigidity may not be the same?
W

Hi Greg,
thanks for the video! I know a little french but not enough to follow your speech ...
But the things are very clear to me: you have NO sophisticated special charging system, but the very basic first charger, the so called "Trafolader" (transformer charger) together with a "Ladeprint" (charging PCB-board under the seat). That is all "series" and nothing special. In this way, the El was built several hundred times until the beginning 2000's. Mine from '91 had the same setup, but I soon replaced it by three separate "switch-mode" chargers, each for one lead acid batt in this time. Now I have just one modified Meanwell 1.5kW switch-mode power supply near/under the seat that charges 13 Winston LFP cells.
The only one modification to the system I could detect in your video was that the pre-owner seemed to use the wires of the former temperature sensor ("NTC sensor") to tell the "ladeprint", that one or more of the cells is fully charged. I dont know a lot about programming options of the "Ladeprint", but maybe it's possible to programm the controller in a way that charging is switched off, when a signal from the on-cell boards is coming ("normal logic") or missing ("fail-safe" logic). Maybe that was done in your case.
In case the signal is digital, you could test with just shorting the 2 wires (blue and yellow) and see whats happening. (Of course the battery has to be wired and it's voltage is "seen" at the "Ladeprints'" terminals.) Then it's possible to wire your Daly to switch off charging in the same way (but to this later, after you made the described test).
If the signal from the cell boards to the "Ladeprint" was analogue then it's more complicated and would, in my eyes, directly lead to the need of a new charger/charging system, because not many are still able to reprogram the "Ladeprint". In this case you better ask for a new replacement charger in the forum. I can't recomend my solution, because you need to "tinker" a lot in order to use the 1.5kW Meanwell supply as a "constant current - constant voltage charger".
So I would go like this:
- wire your battery cells (if not already done)
- check, that the battery voltage is "visible" from the "Ladeprint" (one cooling/metal sheet is positiv, the other one is negative)
- leave the rest wired original (eg. connection to the "Kapamesser", the capacity measuring unit)
- connect a 47k resistors between yellow and blue
*- Put the "trafo" on (plug in the charger)
- check the display lights: what happens/which one is glowing?
- is the charging starting?
- if not, replace the resistor by a 10k one, return to *
- if not, replace by 1k, return to *
- at least, replace by 100 Ohm and then 12 Ohm and return to * (don't go less than 12 Ohm to prevent burning anything!)
if none of the resistors are showing an effect, I would tend to throw the Trafo and the "Ladeprint" out and replace it with a modern charger. But let's first see your result.
Best, Lars
G

First of all, let me thank you for all your detailed explanations! You are a legend!
Tried the suggested fixes but unfortunately still no succes :'(
Here a little video account - this time in English - of what is going on.
https://share.icloud.com/photos/0b7jwUdTftzrPpuITPEFQWUwQ

Below illustrations of the various steps!:
- wire your battery cells (if not already done) - DONE

- check, that the battery voltage is "visible" from the "Ladeprint" (one cooling/metal sheet is positiv, the other one is negative) - Getting 39.2V and same reading from my DALY.

- leave the rest wired original (eg. connection to the "Kapamesser", the capacity measuring unit)
- connect a 47k resistors between yellow and blue
Connected all the suggested resistors, but did not manage to get the battery to charge nor to get the electricity from the batteries to run to the car.

*- Put the "trafo" on (plug in the charger)
- check the display lights: what happens/which one is glowing?
Whether I put a resistor or not, if I plug the battery, I always get the battery icon on the dashboard. As I turn the key, the Parking icon lights up for a second. I can also here a light "click" from beneath the driver's seat.

- is the charging starting?
No, I never manage to either get the batteries to charge or the current to actually get to the car.

Any help or suggestions would be greatly appreciated! I hope it is nothing too major.

if you have the Kappamesser in you EL, this thing can block driving if it thinks the batteries are empty.

A detailed explanation (in german) is here:

Short Version: To disengage the blocking, you must short Kapazitätsmesser PIN 13 und 14 like in the first pictures.

Maybe this helps to start driving... But you should really find a mechanical solution for the free standing cells...

Thanks for having provided me with this lead! I will check it out. Thanks.

My Kappamesser looks a little different but I will locate the relevant pins: 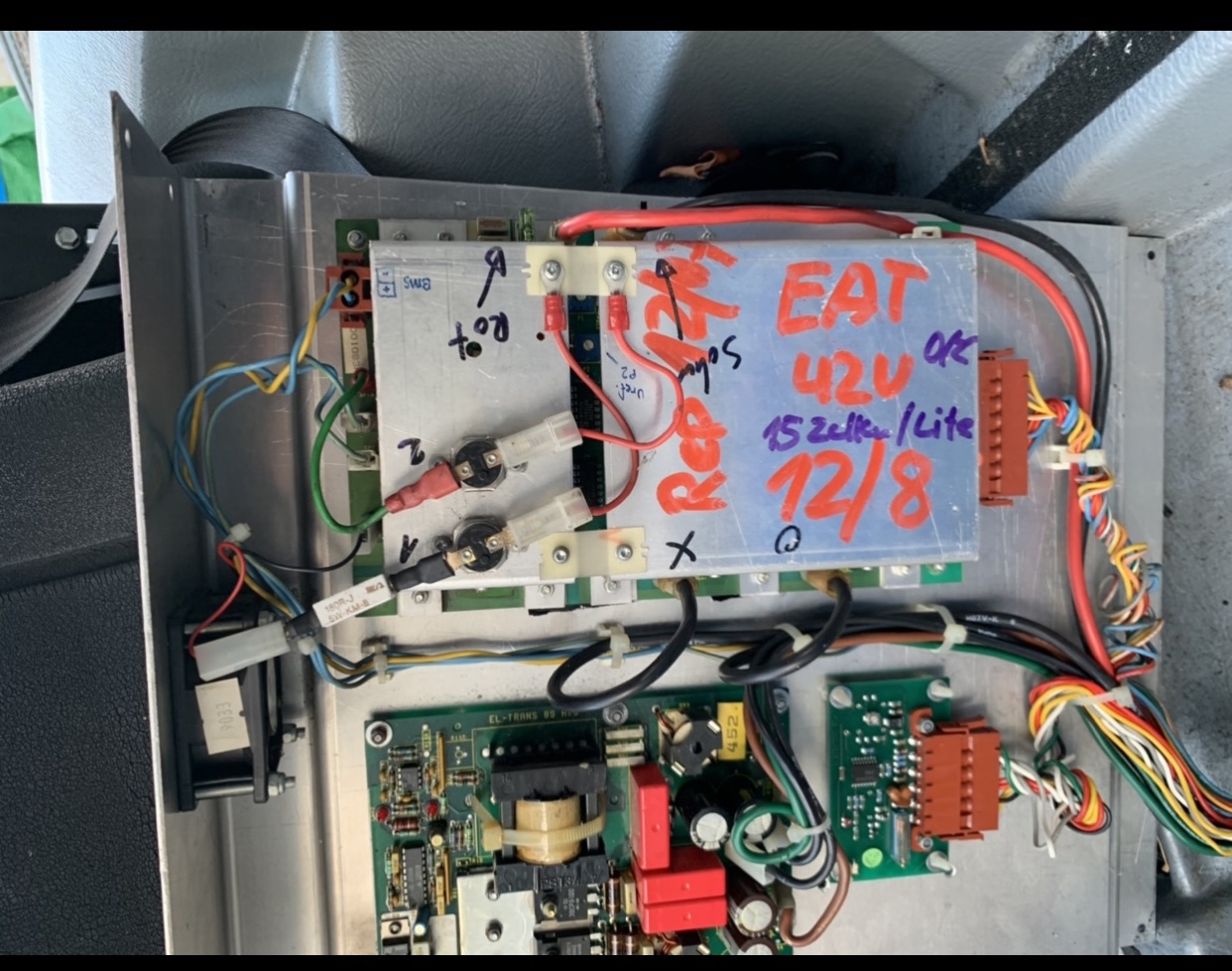 Regarding the free standing cells, this is only to get the car running. As soon as it is, I will pack them together as I have seen some do in the forum for sure.

In your picture i cant locate a Kappamesser .... only The old LADEPRINT , Th DC DC Wandler and The STROMBEGRENZERPLATINE in an unusual position . The blue and yellow wire which went originally to the temperature sensor is now signed BMS ? maybe taken for another purpose.